Presented by Ack
Part of the Retro Gaming 101 Series

USA, 1997.  Nintendo had just proven with the Japanese Pokemon craze that its nearly 10-year-old Game Boy still had the ability to dominate the handheld market without even trying, keeping themselves afloat despite problems with their two most recent console releases, the Nintendo 64 and Virtual Boy.  Tiger Electronics, makers of hundreds of LCD handheld toys, wanted access to that market share so bad it could taste it.  It had been burned in its first major attempt at a cartridge-based handheld, the R-Zone, a red-tinted device intended to compete with Nintendo’s Virtual Boy.

But now Tiger had a new plan: the Game.com.  This device incorporated technology from then-modern PDAs with the ability to access the Internet, while playing the newest game releases aimed at older audiences.  And Tiger wanted that older audience bad, as the Game Boy was dominating with the younger crowd in Japan thanks to a colorful handful of cartridges, and Nintendo was ramping up a multi-million dollar advertising campaign in the West in preparation for its 1998 release.

The Game.com is a strange oddity, the only true handheld produced by a company known for LCD games.  It brought several new ideas to the table, but its scope outpaced the available technology, its marketing was atrocious, and its games list was small and based solely around recognizable name brands.  It was very much ahead of its time, as the Nintendo DS borrowed many ideas from it successfully just 7 years later.  But the Game.com remains an interesting and important piece of handheld history, even if most folks agree that the games really aren’t that great. 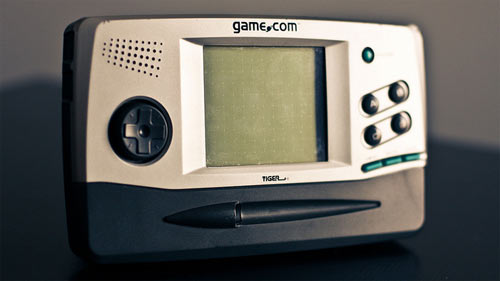