In my previous entry, I discussed how I got the notion at the 2011 PAX East convention that it was high time for me to introduce some form of arcade gaming (beyond arcade sticks) into my home retro gaming setup.  My first foray into this – and something that would prove to be an incremental step – was the use of an iCade, a device that still has more promise than delivery, but which nonetheless offers an affordable and showpiece-worthy entry option into having an arcade cab simulation at home.  If anything, the shortcomings of the iCade would actually be its most important feature, as they motivated me to take the leap into building a full sized MAME cabinet.

Building a MAME cabinet can be pricey, but fortunately I had most of the important electronics already laying around.  Built around a 27” RCA CRT and a Home Theater nettop PC  (similar to this one), I was able to get the basic system setup and running long before I built the cabinet or even looked at buying parts.  I chose to go with a no-frills MAME frontend (MAMEwah) as I just wanted something basic and fast.  I tested all the hardware, used an old USB arcade stick to play with a few games, and basically made sure everything worked before putting it aside to work on the cabinet.

I have never in my life made anything from wood that was more complicated than a “CD Clock” when I was in 7th grade (about 20 years ago), so the idea of building a 6-7 foot tall by 2-3 foot wide MAME machine out of cabinet grade plywood was a daunting proposition.  I started with some easy things: I made sawhorses to work on, I bought several sheets of 3/4” thick plywood, and I started looking for a good set of directions.  I settled in on a set of plans found on http://www.arcadecab.com/, a site that had very good step by step instructions and became my bible throughout the cabinet building experience.  I then ordered and/or purchased all of the needed materials (about $300 worth) and worked off and on for about 3-4 weeks, carefully measuring, adjusting, constructing, fitting, sanding, priming, and painting.  Throughout the entire process I was constantly amazed with myself for not screwing things up, something which I attribute to careful planning beforehand (my dimensions were different than those on the site) and the inclusion of excellent suggestions and illustrations in the plans.  If you want to read more about the actual construction of the cabinet (including many more pictures), you should check out this thread in the forums.

Even though I had made a leap of faith in doing the woodworking, I didn’t feel up to the task of wiring up a custom control panel.  I also wanted to have the option of a control panel that could be removed and replaced with other kinds of controllers (more on that below), so I started researching pre-made CPs.  What I settled on was the X-Arcade Tankstick + Trackball.  For one, I had been frustrated by playing games like Centipede and Missile Command with a joystick on the iCade, and I wanted something with a built in trackball.  Second, I wanted something that would stand up to the rigors of my two year old son, who would likely begin abusing the cabinet the day it was built and probably continue to do so until he reached his mid-teens.  The Tankstick boasted durability and a lifetime guarantee, so I decided to go that route.  The folks at X-Gaming were nice enough to send me a review unit, and so in mid-August I placed the controller on the newly completed cabinet and gave it a whirl. 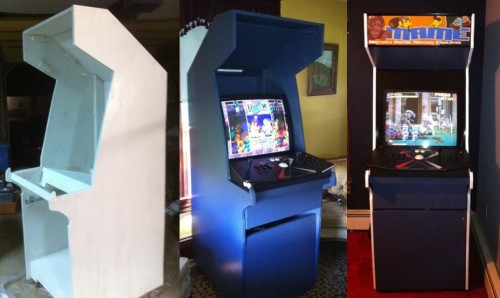 The X-Arcade is a very solid piece of hardware that feels weighty and well-constructed.  It does indeed duplicate the feel of many of the cabinets that you would find in an arcade, and overall my initial impression of the stick was that it was probably the best bat-style stick I had ever used in a home setting.  Not only did the stick and buttons feel responsive and well placed, but the additional buttons on the side (for credit feeding, menu options, etc.) and the ample room for wrist resting on the unit made it feel up to par with some of the best console arcade sticks I had used.  The X-Arcade’s standout features, however, were the trackball (which was even better than I had imagined) and the connectability options.  I built the cabinet with room for console hook ups underneath, and the X-Arcade supports (via adapter) many classic and modern consoles.  I gave it a spin with my Dreamcast (Cannon Spike and Zero Gunner), PS2 (Ibara and Tekken Tag), and my Gamecube (Capcom vs SNK EO and Ikaruga), and could also hook up an Xbox and PS3 if I were so inclined.  The stick felt just as responsive when playing these console games (many of which are not yet possible to emulate in MAME) as it did with the PC, so by going the X-Arcade route I essentially opened up a world of possibilities for arcade gaming.

My experience with the stick wasn’t all positive.  For one, out of the box the Player 1 stick kept getting stuck in a specific direction.  I had to follow a video guide on X-Arcade’s site to make an adjustment and have had no problem with “stickiness” since.  I have also found that the stick doesn’t always do a good job detecting new hardware when you switch it between consoles or between the console and the PC, and sometimes it requires a reboot of a system.  These concerns were ultimately minor though, and the stick is satisfying my needs well.  Furthermore, it is handling toddler use and abuse like a champ. 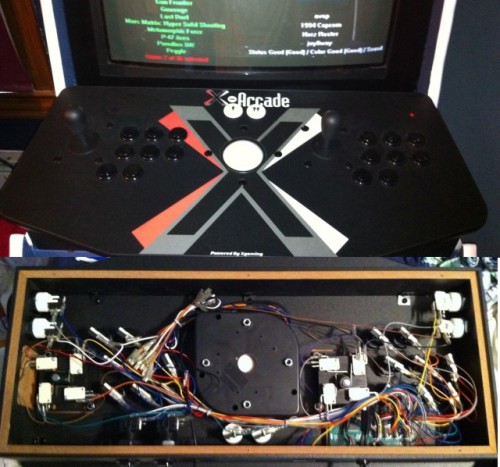 I also chose the X-Arcade because it is heavy enough on its own that it doesn’t need to be permanently fixed to the control panel shelf, and so I can easily lift it out and replace it with a pair of console arcade sticks (not that I’d need to), a steering wheel setup (something I have yet to try) or, as was my design, a Steel Battalion controller.

Hooking up the Steel Battalion controller and pedals to the cab is a remarkable exercise that makes you feel like you are genuinely playing an arcade-like experience.  The act of sitting on a stool in front of the cabinet while operating the pedals and controlling the sticks and other buttons on the controller t is something that anyone who can duplicate the experience should do immediately.  The cabinet works great as a MAME machine and gives me all the classic coin-op play I can handle, but it also doubles as a unique experience for playing some great console ports and original titles, and for that I couldn’t be happier with it. 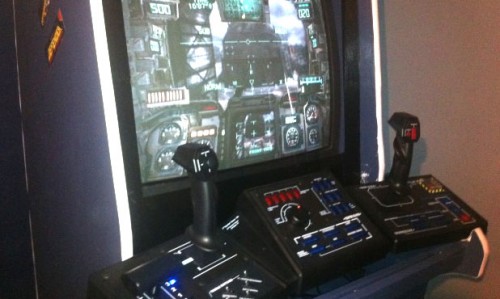 The cabinet is now sitting in my “media room” next to the TV where I do most of my modern gaming and movie watching.  The ability to stand (or sit) at the cab while my family watches TV shows, while friends watch football, or when I want to get up on a commercial break is exactly the kind of experience I was looking for.  My son is already addicted to trackball based games like World Class Bowling, I have had late night Galaga and Guwange sessions, and my wife has bested me many times in Super Puzzle Fighter II Turbo.  I still have a few minor things to do – I want to install a coin door (for aesthetics at first, maybe as functional later on) and still need to settle on some side art….but at this point those are minor concerns, as the vision I had at PAX East in the spring had been realized by the end of the summer, and I now have an arcade experience at home!

If you have had similar thoughts and want to know how to get going, I’ll be happy to answer any questions or offer advice in the comments below…