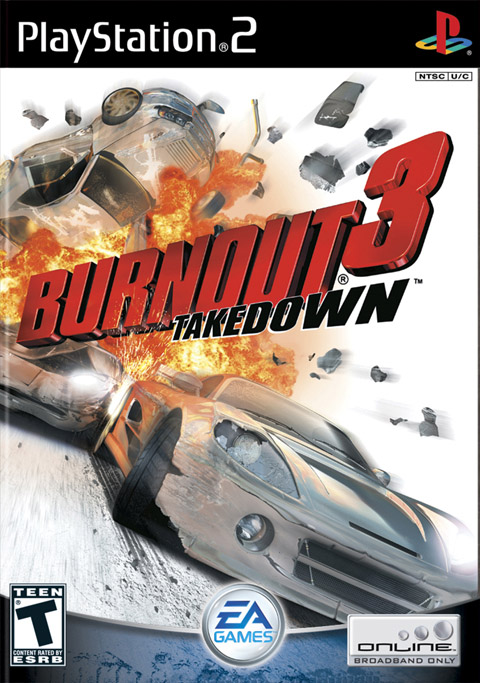 Burnout 3, was a game that wasn’t particularly spectacular, except in how fun it was and how well the game still holds up. Burnout 3, it wasn’t the most incredible game ever, it was just another Burnout sequel.. but damn it was fun. The other unique quality being how well its aged. Pop your PS2 in sometime and try her out, she doesn’t look too bad, and she certainly feels great to play again. The graphics were good because it had lame-o textures on top of great models, with enough light effects to hide graphics quirks, however only where needed. Also, they had such a short draw distance for pedestrian vehicles, that sometimes in multi, it got a bit hairy trying to dodge the randomly appearing cars at high speeds, which created a motion blur while you blasted past everything… which also hid imperfections in the graphics (is it just me or was there a lot of clever touches here?).

Also this game feels fast, and I mean really fast. Outrun 2 fast, but maybe a bit more. The music was a nice mix of indie rock, which was the theme of the era, and honestly it fit well and helped carry the game’s rhythm well. The game had excellent sound design, and beautifully chosen race locations. Even the game’s radio DJ “Stryker“, who you’d assume to be inherantly annoying and mismatched, felt like he belonged in this world that Burnout 3 had created. Now some of this was always part of the Burnout series, and thats not my point, I said it wasn’t very unique already. I’m talking about the remarkable fact that I enjoy this PS2 game, as much as the day I got it.