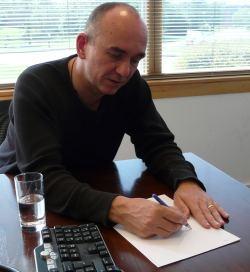 He’s back at it again and we’ve got to admit, this looks pretty cool. In the video below, Molyneux demonstrates his upcoming game for the Apple iPad, Curiosity, which is at this time is just a technology experiment. He’s creating this game under his new company, 22 Cans, which will be releasing 22 experimental games that will serve as research and development for a bigger game  2 years later. This is an interesting concept which will likely serve as funding and research for  Molyneux’s company.

This concept looks quite good and shows the type of different ideas Molyneux will be persuing. This first game, Curiosity, is being planned for release date in September for iPad/iOS (and possibly Android and PC, although this hasn’t been confirmed). The game is being made with the Unity graphics engine and was demonstrated at Unite 2012, a convention for the game engine.

[Update] Curiosity’s name will change according to a tweet by Molyneux . The name is already in use by NASA for their new Mars rover which of course comes up on Google very well. This doesn’t make for a good game title… So far Molyneux himself seems to be suggesting “The Cube” although he says the official decision will be posted the 22 Cans official Twitter.