Did you never get to beat Super Mario Bros?

Are you too busy now, as an adult, to beat it?

Well, Swedish game designer Johan Peitz has got just the thing for you… 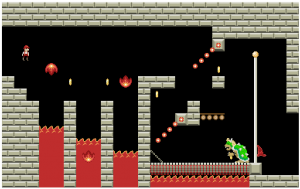 He’s created a game called “A Super Mario Summary” which is an adaption of the original Super Mario Bro’s game from the NES. He’s converted it to a single screen puzzle platformer. Yes… each level is composed of a single screen in which you must figure out how to make it to the flag pole. This type of game is very popular with Flash game designers and mobile game designers. He created this game, apparently in just 48 hours for the 23rd Ludum Dare 48 hour game development challenge! Wow!

You can play it here!

It’s quite enjoyable and definitely worth a look!