Quantic Dream‘s next big game, Beyond: Two Souls, just announced their release date for PS3. Bigger than that though, is they also revealed Willem Dafoe is in the game. Not just his voice… not just his likeness, but actually full on acting in the game. Willem Dafoe explains, “I’m having a good time on this and I think it’s a beautiful story. I’m also curious as we shoot. One of the challenges of doing this is the player participates in this scenario and chooses the character’s actions.” He continues,” the possibility of where the story goes is fantastic.” Check out this really interesting video which features actor Willem Dafoe speaking about his role in the game. It also includes some behind the scenes of him acting alongside Ellen Page in full mocap gear and all.

CVG also posted an interview with David Cage which includes how Willem Dafoe actually looks in Beyond: Two Souls. In the game, Dafoe plays a government scientist who researches paranormal activity. He begins studying a young girl (played by Ellen Page) and becomes a sort of surrogate father to her. Eventually, this leads to him using her for his own agendas. David Cage, Quantic Dream’s studio head explains, “Working with Hollywood talents adds a lot of pressure to the development process in exchange of a significantly better acting performance in the game.” 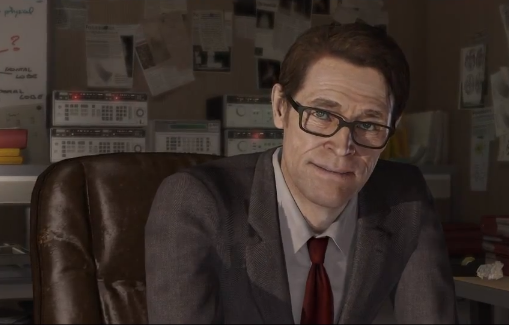